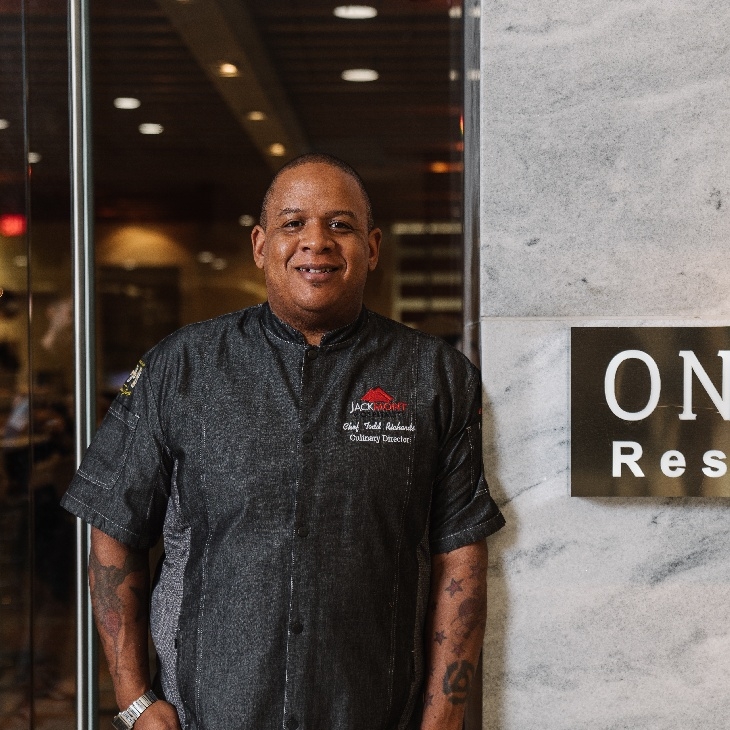 Chefs in the House with Todd Richards of One Flew South

Half-Mile Farm is delighted to present up close and personal experiences with some of The South's most acclaimed chefs in our Chefs in the House dinner series. Limited seating will make for memorable evenings amid the bucolic lakeside setting of a luxury country inn.

For the special "Highlands Food and Wine" event at Half-Mile Farm, Todd Richards of One Flew South in Atlanta will be in the house. Chef Todd Richards is an award-winning chef known for his contemporary cooking style rooted in Soul and Southern cuisine. A native of Chicago and based in Atlanta since the early 1990s, Richards is a self-taught chef and two-time semifinalist for James Beard Foundation Best Chef: Southeast.

Richards is the Culinary Director of Jackmont Hospitality, overseeing One Flew South and Chicken + Beer, both located in the world's busiest airport, Hartsfield-Jackson Atlanta International Airport. One Flew South is a two-time James Beard-nominated fine dining restaurant on Concourse E specializing in Southern-inspired global cuisine. Chicken Beer, owned by hip-hop icon Chris "Ludacris" Bridges, is located on Concourse D and specializes in Southern food. Chef Todd is the chef/owner of Richards' Southern Fried and has previously helmed the kitchens of prestigious hotels and restaurants including The Shed at Glenwood, The Pig & The Pearl, Rolling Bones Barbecue, White Oak Kitchen & Cocktails, The Four Seasons Hotel Atlanta, The Ritz-Carlton (Atlanta, Buckhead and West Palm Beach), Villa Christina and the Oakroom at the Seelbach Hotel, which garnered the prestigious AAA 5 Diamond Award for restaurant excellence under his tenure.

COST AND DETAILS
Tickets for the inclusive evening are $185 per person, plus tax and gratuity.
Call 828-787-2635 or 828-787-2916 to reserve your seats.
Check lodging availability (not included in ticket price).
#ChefsInTheHouse #HalfMileFarm